Origins of the Captains Yacht Model

Theres been a little confusion surrounding the origins of the Captains Yacht model being offered as an exclusive by the Star Trek fanclub.  Specifically, is it from the actual studio shooting model or the CGI model?  Two conflicting comments in the Star Trek Communicator magazine are the source of the confusion.  But thanks to the excellent reporting efforts of Playtrekker Jim Brumbaugh owner of SciFiFanatic.com and writer for the magazines Star Trek Communicator, Star Trek Monthly Magazine, and Star Wars Magazine its a little bit of both.  Here is the answer to the mystery.

I just spoke with Sariah O'Brien, the Product Development and Catalog Coordinator of The Communicator, about this contradiction. She tells me that this discrepancy had already been brought to her attention, and that she has had discussions with John Eaves about it in order to revise The Communicator's ad copy.

First of all, you should know that the reason I said that the ship only existed in CGI was because that was what I inferred from what I had been told! However, it appears as though this is more along the lines of a problem in semantics between the effects used in the films "First Contact" and "Insurrection".

According to Sariah, a shooting miniature was indeed created - for "First Contact".  She said that she believes that this miniature was *not* used in "Insurrection", which was apparently why I inferred that the ship only existed in CGI, since my discussion with Mr. Eaves only touched upon that film.


I checked my transcription of the audio tape I made of my conversation with John Eaves, and here's a portion that didn't make it to the final article:


"When I worked on Insurrection, that was one of my jobs  to design the Yacht. I drew that up for the show, and they made computer models. That was our first show that was CGI instead of actual shooting miniatures."


After hearing this statement, I apparently got it into my head that the ship existed only in CGI (since I was told that it was designed for "Insurrection", why suspect that one had been built for "First Contact"?). I later asked a question of Mr. Eaves, querying him about the challenges of creating a physical model from something that had previously existed only in CGI. Since I was not "corrected" after making this statement, I guess I just ran into that article based upon my understanding of the situation. Technically speaking, though, the statement I made was incorrect in light of this new information.


However, I'm not the only one who had this understanding, at least as far as "Insurrection" is concerned. Here's what the editor of The Star Trek Communicator, Larry Nemecek, just wrote to me:


>As far as I know, ALL the ships in Insurrection were

>all-CGI, except for the exploding science ship at
>the end, which was a huge quickie half-ship and
>rigged with pyro.
Therefore, when speaking with regard to "Insurrection" alone, the general understanding is that shooting miniatures were not used (with one notable exception).

I am told by Sariah that their ad copy will now reflect that the referenced "shooting model" was from "First Contact", and the plaque that is used for the base of the model was created from the actual Commissioning Plaque that was used in "Insurrection".


I hope that sufficiently answers the questions!

So there ya go!  Thanks Jim! 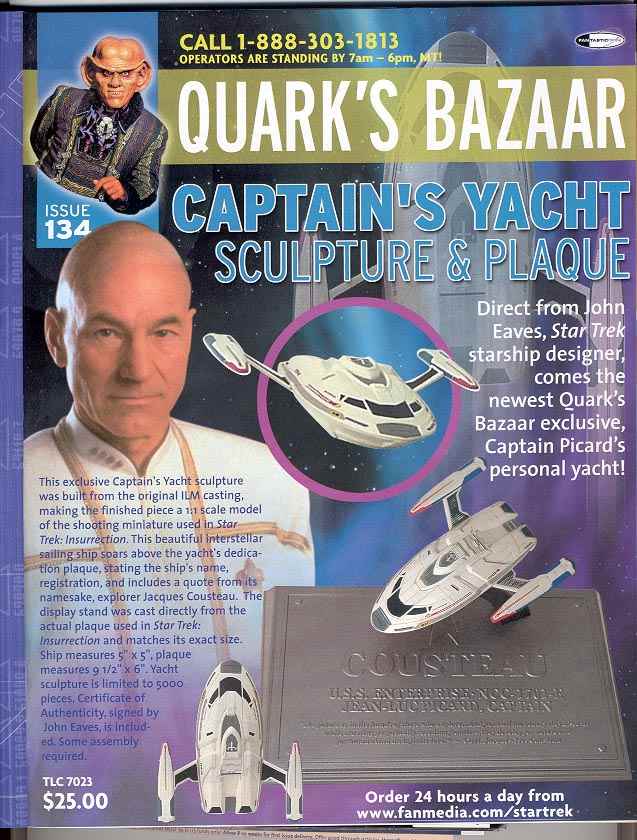